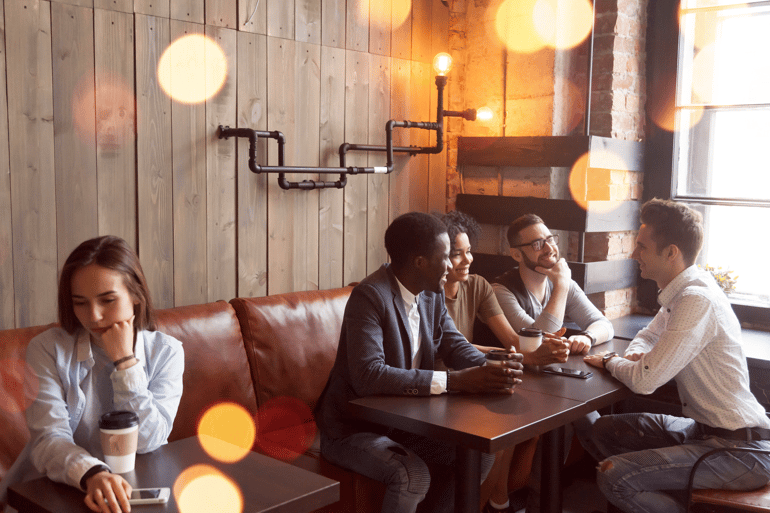 New York State (NYS) has once again increased its protections against workplace discrimination and harassment in the state.

Under a new law enacted on Aug. 12, 2019, certain provisions that were newly added by the state’s 2019 budget in 2018 are expanded so that they cover not only sexual harassment, but also all other types of unlawful employment discrimination. New employee notice requirements apply as well.

The new law also makes all employers in the state (not just those with four or more employees) subject to all provisions of the NYS Human Rights Law (HRL) starting on Feb. 8, 2020. A variety of other changes will make it easier for individuals to hold employers liable for harassment and discrimination.

Employers in NYS should become familiar with the new law and begin providing written copies of their sexual harassment prevention policies and training program information in English and each of their employees’ primary languages. Employers should also monitor the NYS Department of Labor’s (DOL) website for model foreign-language notices.

Changes to Recently Added Provisions on

New York’s 2019 budget law, enacted in 2018, amended several of the state’s laws to provide increased protections against sexual harassment in the workplace. The new law, which was enacted on Aug. 12, 2019, expands many of those protections.

The table below provides an overview of how the new law changes provisions that were added in 2018. 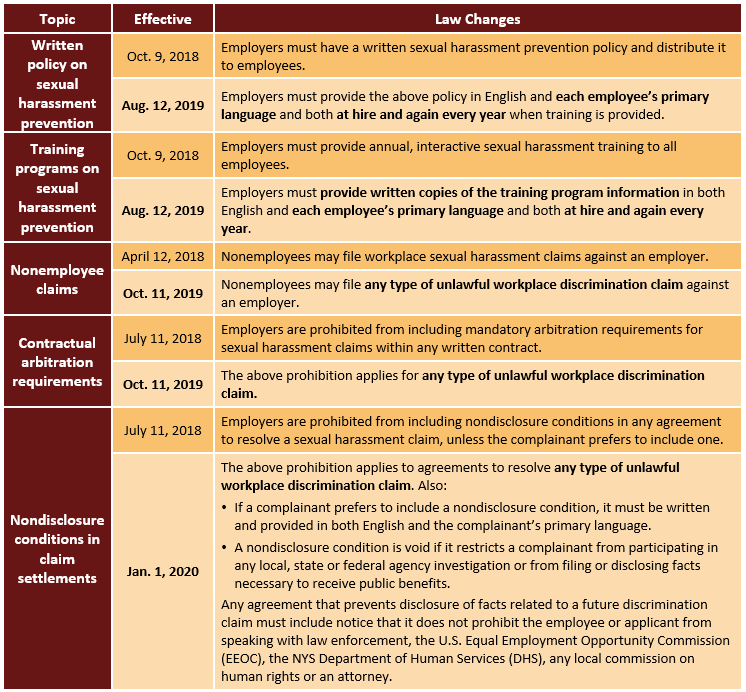 The new law expands the NYS HRL’s current definition of unlawful workplace harassment effective Oct. 11, 2019. Specifically, harassment will be considered an unlawful discriminatory practice when it subjects an individual to inferior terms, conditions or privileges of employment because of the individual’s opposition to or participation in any proceeding involving unlawful workplace harassment or because of the individual's membership in one or more of the following protected categories:

Effective Aug. 12, 2019, the new law makes it easier for complainants to prevail against employers in unlawful workplace harassment claims by requiring the NYS DHS and courts to interpret the NYS HRL in a manner that maximizes deterrence and correction of discriminatory conduct, regardless of how federal laws with similar provisions have been interpreted. Other changes will further ease a complainant’s burden of proof effective Oct. 11, 2019, by:

Although an individual who files a workplace harassment claim will no longer have to show that another person was treated differently, employers will have an affirmative defense to liability if they can show that the allegedly harassing conduct did not rise above the level of what “a reasonable victim of discrimination with the same protected characteristic” would consider “petty slights or trivial inconveniences.” This new affirmative defense will be available to employers starting on Oct. 11, 2019.

Effective Oct. 11, 2019, private employers may be ordered to pay not only a complainant’s actual damages, but also up to $10,000 in punitive damages for any unlawful discriminatory practice.

The new law will also require employers to pay the complainant’s attorneys’ fees in any case in which a court or the DHS finds them to be liable for unlawful discrimination. On the other hand, employers will be able to recover their own attorneys’ fees from a complainant if a court or the DHS finds that the claims brought against them were frivolous.

The new law extends the period for individuals to file sexual harassment claims. While other types of unlawful discrimination claims must still be filed within one year after an allegedly unlawful discriminatory practice, individuals will have up to three years to file claims of workplace sexual harassment. This provision goes into effect on Aug. 12, 2020.

Most of the NYS HRL’s provisions currently apply only to employers with four or more employees. However, the law’s prohibitions against workplace sexual harassment apply to all employers in the state, regardless of size. Starting on Feb. 8, 2020, all other provisions of the NYS HRL will apply to employers of all sizes as well.  In general, this means that every employer in the state will be prohibited from discriminating against any individual based on his or her membership in any of the protected categories listed above.