On Friday, Aug. 31, 2019, the Centers for Disease Control and Prevention (CDC) issued an advisory warning consumers of the dangers of vaping after over 215 cases of mysterious lung disease have occurred. The advisory also urges consumers to refrain from purchasing cannabis and e-cigarette products off the street, and stop modifying vaping devices.

According to the CDC’s advisory, the symptoms of this vaping-related illness are gradual. Many patients reported difficulty breathing, shortness of breath and chest pain prior to hospitalization. Some patients also reported mild to moderate diarrhea, vomiting, fever and fatigue. In some cases, the illness can become severe, resulting in a coma or death. The mysterious lung illness has resulted in the death of one adult so far.

The CDC, Food and Drug Administration and other public health agencies are currently investigating these cases. Additionally, states are conducting separate investigations into the mysterious illnesses. While the investigations are still ongoing, public health officials are warning consumers to refrain from using e-cigarettes and to seek medical attention if they experience any symptoms. 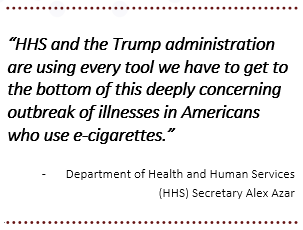 The investigation into these vaping-related illnesses is underway. While this investigation is ongoing, federal and state public health officials urge consumers to avoid vaping. Additionally, the CDC warns that youth, teens and pregnant women shouldn’t use e-cigarettes.

If you currently use or have recently used a vape pen or e-cigarette and experience breathing difficulties, chest pain or shortness of breath, seek immediate medical attention. For more information about the risks of vaping, please consult your doctor.