On Thursday, Aug. 29, 2019, Surgeon General Vice Admiral Jerome Adams issued an advisory encouraging youth and pregnant women not to use marijuana due to health risks.

Prevalence of Marijuana Use in Youth and Pregnant Women

The surgeon general’s advisory states that marijuana is the most commonly used illicit drug in the United States. In a 2017 study, 9.2 million Americans between the ages of 18 and 25 reported using marijuana within the past month of being surveyed. Marijuana use among pregnant women rose from 3.4% to 7% between 2002 and 2017, according to a national survey.

Marijuana contains Delta-9-tetrahydrocannabinol (THC), which is responsible for producing the symptoms of getting high. It acts by binding to the brain’s cannabinoid receptors to produce a variety of effects. These effects can include intoxication, euphoria, and memory and motor impairments.

The same cannabinoid receptors that marijuana binds to are essential for brain development. Frequent marijuana use has been associated with brain changes that can impact attention, decision-making and memory. Because the human brain isn't fully developed until a person reaches their mid-20s, the surgeon general is urging adolescents and the nation's youth not to use marijuana.

Marijuana use during pregnancy can cause adverse outcomes, including abnormal fetal brain development and lower birth weight. If a mother uses marijuana while she is pregnant, the THC can enter the developing brain of her child, potentially disrupting the endocannabinoid system, which promotes a healthy pregnancy and brain development. 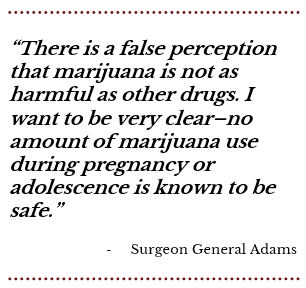 The surgeon general’s advisory is intended to raise awareness of the dangers of marijuana use in youths and pregnant women. Talk to your doctor for additional information.